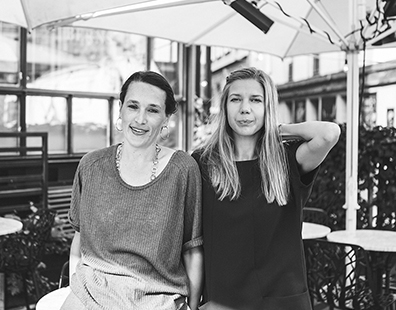 END_OF_DOCUMENT_TOKEN_TO_BE_REPLACED

Angela Tillman Sperandio and Samira Bouabana are the founders and creative directors of Hall of Femmes, a project selected by Creative Review as one of the most interesting design projects for the future. For ten years they successfully ran Hjärta Smärta, a creative and innovative design agency in Stockholm. As a team they have been rewarded Young Creative of the Year, Silver Egg by the Swedish Association of Communication Agencies, Young Swedish Design and Gold in the design competition Kolla!. They teach and lecture at several of Sweden’s design schools, such as Beckmans College of Design, Berghs School of Communication, Konstfack University College and HDK. They have been jury members in the design category at the Golden Egg, Kolla!, Månadens Design and Visuelt in Norway and have participated in exhibitions in Sweden, the United States, Italy and Japan. Their work is represented in the permanent collections of Nationalmuseum in Stockholm and Röhsska Museet in Gothenburg.

Hall of Femmes is the recipient of the 2013 Bengt Hanser award, presented by the Swedish Association of Communication Agencies (Komm!). The award was established to »encourage opinion-forming contributions that illuminate and argue the role of market communication in the economy and society.«
Photo: Richard Ortega