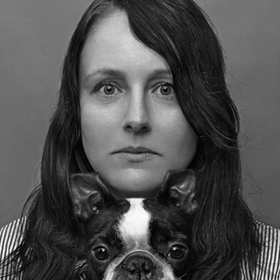 Ann-Sofie Back has been described as the fashion world’s enfant terrible and single handedly responsible for paving the way for conceptual fashion in Sweden.

Having completed her MA at Central Saint Martins in 1998, Ann-Sofie Back has not once seized to surprise, mirror and question stereotypes about femininity, celebrity culture and how women are glamorized in fashion. In 2005 Ann-Sofie founded her diffusion line BACK, which made her one of the industry’s most outspoken and respected designers.

Her intelligent and often provocative approach to beauty has won her various awards such as Guldknappen and best designer of the year 2004 at Swedish ELLE awards. Today, Back spends half her time at Cheap Monday, a company with high-street commercial appeal, and half in her own studio where production is geared at a much smaller more eccentric clientele.

Black and white portrait of Ann-Sofie Back by Bo Brinkenfalk.